NYTimes reports on food in Houston

You know, I’ve only seen J.J. just like in that photo… you know… running around with a beer while serving food… pretty accurate action shot in my book. 🙂 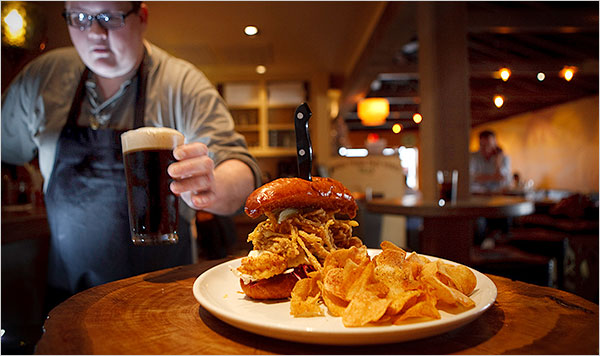 RARE is the city where a chef can set up tables inside a former car dealership and pack the house nightly. But on a recent evening in Houston, I sat inside that space, which has been reborn as Reef, a bustling, hyper-inventive seafood restaurant, and thought about the unusual fish on my plate: a Gulf of Mexico wahoo, to which the chef and co-owner Bryan Caswell had done unexpected, and unexpectedly delicious, things.

I was thinking, too, about how, in the years since I left Houston, where I grew up, it’s gone from a city where the high-end restaurants were as gilded as they were mostly mediocre to a place with a world-class food scene and a rising generation of culinary stars. Instead of playing catch-up to restaurant trends elsewhere, Houston’s most talented chefs are finding their own voice: uncovering the food traditions of the area’s ethnic populations, experimenting with little-known seafood varieties from the nearby gulf, and embracing Texas’s strange agricultural rhythms.